Just as trees falling in the woods with no one around to hear there are millions of Foursquare check-ins that no one is listening to. In an economy where brands have to get scrappy to preserve brand loyalty and nurture the lifetime value of a customer there sure is a lot of low-hanging fruit left on the trees. 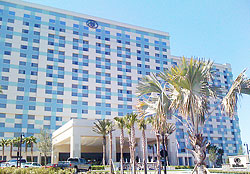 Business was calling from Orlando and I love getting great deals on travel through Priceline. A spin of the big bidding wheel and I came up with a great rate on a resort property that we haven’t visited before, Hilton Bonnet Creek. In normal fashion after I checked-in at the front desk I also checked-in on Foursquare. I intentionally allowed Foursquare to update my Twitter account of my check-in to see if anyone was listening.

After a productive and relaxing stay (checking in daily on Foursquare hoping to oust the transient hotel Mayor) I checked out on March 200th. To my delight on March 23rd Bonnet Creek was following me on Twitter and sent me a simple message “@KevinLyons Hope you had a good weekend @BonnetCreek!” That was pretty much the end of the conversation but it was memorable. Beyond memorable it invoked a perception of an open communication channel, or back-channel, that I will use to assist in planning my next stay. Yes, I will be back.

The Bonnet Creek Twitter account seems pretty active with the creation of memorable interactions. They may not have completely figured out this social media landscape (who has) but they are in the game, listening, and engaging.  Well done! 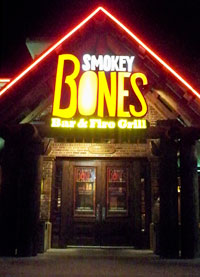 In early April while driving home from a great family photo shoot with Jheri Badenhorst I was craving a really good burger. Knowing Smokey Bones Bar & Fire Grill had great BBQ I could only assume their burgers followed suit.  I checked in on April 3rd allowing an auto-post to Twitter and I left a “tip” on the Foursquare venue page touting their great burgers. Three opportunity “baits” to see if they anyone was listening.

Yes! On April 5th @SmokeyBonesBar started following me on Twitter. Impressed that they were listening I started to get concerned when they didn’t speak. Then, on April 20th they broke up with me. I was un-followed. Was it something that I didn’t say? I took a look at their Twitter feed and they were talking to other people but it seemed like they were only doing so after they were being addressed with a compliment or question. I did notice that I had inadvertently not followed them back when they followed me. Could this be the reason for the un-follow?  I started following them on that same day. I still follow SmokeyBonesBar but that is about where the relationship stays.

There are no official rules in this land of social media but I believe businesses do need to be cognizant of the affect of their messaging and actions to the sentiment of their customers. I don’t think Smokey Bones is failing in all of their social media efforts, they are in the game, but there are always opportunities to improve. I will be back to Smokey Bones as I can’t resist their homemade donuts. Maybe someday I will be cool enough to be in their Twitter club too. 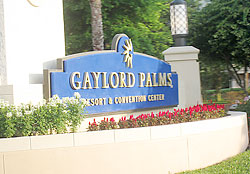 In April, Thom Scott’s Extreme Business Makeover event with Bob Burg, Zig Ziglar, Trey Pennington and others came to Orlando. I was looking forward to catching up with some of the amazing #XBM cast of characters and the dates coincided with my oldest daughter’s 13th birthday celebration. We took another spin on the Priceline wheel of bids and came up with a great price at one of our favorite Orlando properties, the Gaylord Palms Resort. Upon check-in I again checked in on Foursquare with the auto-post to Twitter. I also checked-in on Foursquare to some of the restaurants within the resort. I even held the title of Mayor for a few hours. We had a wonderful stay and their customer service was over the top.

I have followed their Twitter account (@GaylordPalms) for some time now and they also follow me back. You would almost say this was not our first date. Surely this amazing Gaylord property is monitoring and listening to social media, right? Unfortunately, they don’t appear to be. They are in the game with posting tweets on specials, welcoming large groups, and thanking people for reviews and compliments. There is a huge opportunity for them to take it to the next level.

During this trip I also checked-in on Foursquare to the Caribe Royale Hotel and Convention Center for the Extreme Business Makeover’s tweet-up. I did monitor that Caribe Royale engaged with other event attendees on their Twitter account (@The_Caribe) but I didn’t hear from them. Criminal? No, not really.

I post these as my simple observations from the perspective of a consumer, a business, and a social media evangelist.

As a consumer: I am delighted to be found and acknowledged but I am slightly confused where to go from here. I need the brands to lead me.

As a business: We have a promising outlook. Brands are testing the waters of social media but still have commitment issues. Many of these issues can be overcome through shared knowledge and experience.

As a social media evangelist: Many have not heard of the fruit that is ready for harvest. Very few have truly tasted.

Have you been the “target” of social media monitoring? What were some of your experiences?